and you might even be tempted to add that there was
enough down there to get on with anyway so why
worry about it and who’d argue the point, the drift of

what I am saying possibly being that what glorious
small thought could ever be deemed appropriate
when confronted with such immensity, by which I mean

all those patched bolts of crumpled scenery unrolling
for what could be ever-and-ever – like fate, history
or the hereafter – indicating meaningful assertions

in hessian, blotched sailcloth, with obscurities of muslin,
not to mention an endless sufferance of sacking,
complete with suggestions of hot and gritty ashes,

all of them ripped apart by huge riverbeds, none of which
were presently serving their prime purpose?
But never forget you could very well take a deep breath

and go on to ask what about the hand of man and if things
might not be enhanced greatly by long strips of steel rails,
chains of lorries loaded with asphalt or concrete

and shops with gas pumps, just as with a dramatic sweep
of the arm you may as well go the whole hog and admit
to the mystery of endless giant clouds that were pegged out

like permanent fixtures, exactly the same as last time.
In other words there were aspects of largeness that didn’t
fit a neat picture even though, I agree, they also weren’t

trying to go out of their way to be what you might describe
as pretentiously impressive on an entire imaginary
scale of holy grandeur. It called for some sort of theory

to tidy up everything. I didn’t feel it was down to me
to figure it out and the passenger next door never stopped
talking, so there it still is, patiently out there waiting.

from Looking out to sea
(Steele Roberts) 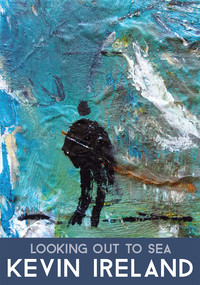 Kevin Ireland is one of New Zealand's most highly acclaimed writers. His published work includes novels, memoirs and more than fifteen books of poetry. Ireland has won the Montana Award for History and Biography, and the National Book Award for Poetry. He was awarded an OBE for services to literature (2000), was made an Honorary Doctor of Literature by Massey University (2000), received the prestigious Prime Minister's Award for Poetry (2004) and the AW Reed Award for Contribution to New Zealand Literature (2006). Ireland lives in Auckland, on the North Shore.

Kevin Ireland’s Choice: ‘from This Paper Boat’ by Gregory Kan